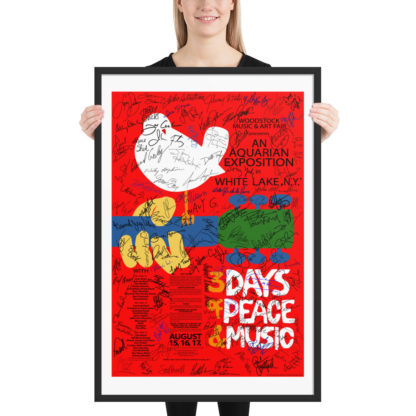 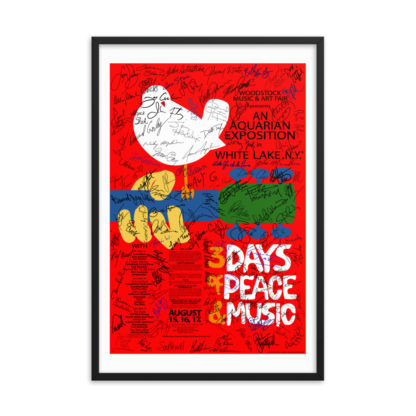 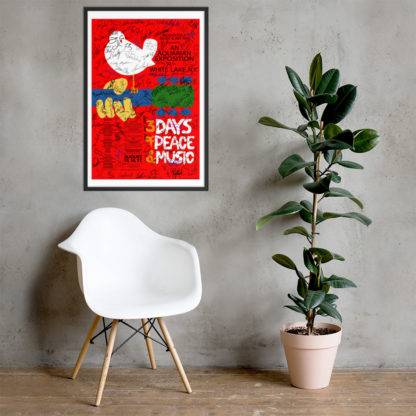 Celebrate 50 years of Woodstock with this limited edition, framed, fantasy memorabilia poster. Over 100 signatures carefully selected and placed onto our re-imagined replica poster for the ultimate Woodstock fantasy memorabilia experience.
Note: This product will come with a black semi-hardwood frame and an acrilite front protector.

Note: There are only a handful of these amazing posters left.  Get yours today!

We’ve had many questions regarding this poster, so see below for some of the behind-the-scenes info directly from the artist.

We wanted to commemorate the 50th anniversary of Woodstock by offering something special. Since some of the most iconic headliners were dead a year after this festival ended, it would have been next to impossible to get their autographs on an original Woodstock promo poster. Well, we decided to create our own replica poster, and copy the signatures of all of the bands that attended and put them onto the poster as if you had taken the poster around during the festival and had everyone sign it.

Each autograph has been specifically chosen for its clarity, iconicity, or nostalgic character for this amazing poster. These replica signatures have been painstakingly collected and reproduced for the most authentic feel possible. All your favorite artists including Jimi Hendrix, Joe Cocker, Pete Townsend, Janis Joplin, Grace Slick, Carlos Santana, Crosby, Stills, Nash, and Young just to name a few. Practically every major artist who attended the festival is represented, all on this re-imagined replica poster.

The poster itself is a museum-quality poster with a vivid print made on thick and durable matte paper. A statement in any room, these puppies are just the accent your room or office needs. This item is so unique, it is bound to be a conversation starter and evoke a sense of awe in anyone who sees it.  Due to our desire to mirror authenticity, this poster is only being offered in the 24in x 36in size, as this was the dimensions of the original poster.

The matte black frame that’s made from wood from renewable forests adds an extra touch of class.

A bit from the author:

The original idea was simply to come up with something to commemorate the 50-year anniversary of the Woodstock festival (my first was the Icons of Woodstock design).  It blows my mind that it has been 50 years.  So many of those great artists have now left us and there really isn’t a lot of memorabilia out there.  Well, since I collect autographs and that has been a hobby of mine for many years, I began to daydream a bit and wondered what it would have been like to have been able to walk around to all of the artists and get them to autograph a poster.  Unfortunately, I know from experience, you can often stand for hours in the rain, waiting for an artist to come out of a venue, and if you are lucky enough to be one of the 50 people they grant an autograph to on the way to their limo, it ends up being more of a chicken scratch than an actual autograph.  Not to mention, it is almost always put in the exact place on the photo that makes it show up the least.  I have always disliked that about obtaining autographs, that is why I enjoy the replicas almost as much if not more than the real autographs.  With the replicas, people take a real autograph, trace it, and place it where they want it on the photograph.  This not only makes is more visible, but it also allows the creator to choose an autograph that is truly representative of the artist.  This makes for a better piece of art in my opinion.   It also doesn’t hurt that since it is not the real autograph, it is a fraction of the price of a real autograph.  It is the best of all worlds…well unless you are collecting autographs to be monetarily worth something.  I personally do not care about that.  The autographs make me feel closer to the artist and my enjoyment of the work they have produced.  The replicas are more aesthetically pleasing, so they stand out more and do more to highlight both the artist and the image the autograph is on.  So with this in mind, it wasn’t long before I realized I had never seen anyone try to do that with Woodstock.  Painfully, we lost Janis Joplin and Jimi Hendrix a year after the festival, so no poster like I was imagining could ever exist for real, so I set about creating a fantasy poster.  I started with the iconic, red, Woodstock poster that we all remember.  I made the necessary changes so that it was definitely my own artwork and not copyright infringement and then set about looking for autographs.  My criteria were, first, I wanted it to be clear signature.  I wanted one of those autographs you receive from a friend sitting at a table with you, not one of those “stroke the pen over an 8×10 on the way out the door” types.  I also wanted it to be representative of the time if possible.  People’s signature changes over the years so while it is easy to know Janis Joplin’s signature has to be from around that time, does Pete Townsend’s autograph still look the same as it did all those years ago?  The last bit was the crowding.  These people tend to have huge egos, and rightly so.  If this were real, there would be a few artists who would fill half of the poster, leaving the last few to fill in the margins with something small and illegible, so they needed to be on the poster as if they actually cared about the entirety of the piece.  For the finished product, I used a little bit of design know-how, meaning I put a number of the biggest names within the bird, because your eye tends to go there first, and voila.  You have the poster you see featured here.

I have also been asked for a guide (who the heck is that scribble and I just cannot seem to find Neil Young).  It would probably consist of the list of artists, the band they are from, a very small copy of the signature, and a rectangle with a small dot, to indicate approximately where the signature can be found on the poster.  I am considering it, so if this is something customers would be interested in, let me know at info@DerbyTeesDesigns.com and I can put something together.

The next question I get is, did I get everyone?  The short answer is no.  Some of the lesser-known bands that didn’t stay around very long simply do not have the legion of fans collecting their autographs, so the woman who played the flute or the guy on the bongos simply did not give any autographs to anyone that I could locate.  I can say that I believe I have the lead or “frontman” from every band that attended at a minimum.  I did feel it was necessary to include Wavy Gravy though.  Even though he was not an artist per se, his iconic line “what we have in mind is, breakfast in bed for 400,000” certainly makes him part of the Woodstock experience and worthy of inclusion on the poster.

Next is how long did it take to create?  Well, the original poster took about 20 hours to create.  Then the research began.  First I had to get the list of all the bands that played (yes, that is different than the band list that is on the poster as there were last-minute changes).  Then, of course, I had to find the actual line-up that played at Woodstock.  For some of these bands that have been going pretty much since then, the line-ups have changed and I didn’t want to include someone who wasn’t there, and certainly not over excluding someone who was.  Next, I had to locate their autographs.  A lot more difficult than you might think since I not only wanted “a” signature, I wanted “the” signature.  I wanted an autograph that was not rushed, was clean enough that I could see the detail, and also be from the time period.  Then began the task of actually copying the autographs.  In doing this, I wanted to use a bit of variation, so if you look at someone like Jerry Garcia, there is a double image to minic someone using one of those flat-tipped markers.  It was also important that the feel of the signature was captured.  If you look at Joan Baez, her signature is very delicate, where someone like David Crosby has a heavier hand.  Once the signatures were complete, I wanted to make sure they would all be seen on the poster.  I made some in blue to help catch your eye and move you around the image a bit better, but also to give it a little more of an authentic feel since even if you had your own marker, there would be some artists who had another color.  Lastly, I had to place them on the poster so that there was no overlap.  I wanted every artist to be able to be enjoyed on their own without someone else’s signature crowding them out.  With all of that in mind, it took around 100 hours of work to complete the project.

The next question I get is, aren’t you forging these people’s signatures?  At initial thought one might think so, but think about it for a moment.  If I stand outside of a venue and get someone to give me an autograph, they have given it to me.  It is now mine to do with what I want.  I can turn around and sell that autograph without a second thought (and many get autographs simply to sell them).  The bottom line is, you cannot use someone’s signature in the literal sense, meaning you cannot sign a check or put their name onto a legal document or anything like that in an effort to take monetary gain directly from them.  Just like if I had met Keith Moon though and decided to write a book about him, I am able to do that because I am not taking money away from his estate in any way.  The book is my work.  My art.  Just like Marilyn Monroe or Campbell’s soup could not sue Andy Worhol for using them in his art, once freely given away, your signature becomes more like a piece of art that person made.  We do not call artists who learn by copy paintings from the great masters forgers because no matter how closely they are able to recreate the painting, it is still their work, their painting.  The trouble comes in when they try to pass their copy off as the original artist’s work.  THAT is forgery.  So if you honestly believe I could get a poster like this with all of these iconic people on it and it be genuine, and have more than one to offer, AND it not cost a zillion dollars, you have more to worry about in life than whether I am forging signatures…and I also have a bridge to sell you.

There are no reviews yet.

This site uses User Verification plugin to reduce spam. See how your comment data is processed.